I beat Ruiner, and Ruiner beat me.

I can’t remember the last time I had to turn down a game’s difficulty, just to finish it.

Ruiner’s thumb destroying mix of dual-stick shooting and beat-em-up mechanics was punishing me even in the tutorial. The first sub-boss I fought took me around ten attempts to defeat. The game doesn’t mess around.

Talking about difficulty in games is one of the toughest aspects of writing about them for me.

I’m not sure what made Ruiner’s challenge feel less fun than, say, Hotline Miami. The latter is one of my all-time favourite games, even though it had me wanting to throw my controller at a wall on occasion. But with Ruiner, I actually felt more inclined to walk away than to power through. If not for its compelling style and world, I may have given up.

It’s not something I’d go so far as to call broken or badly designed, but it did feel like certain sections of the game could have had a mere two or three less enemies spawn during a particular wave of an encounter and maintained a good level of challenge without being as frustrating. 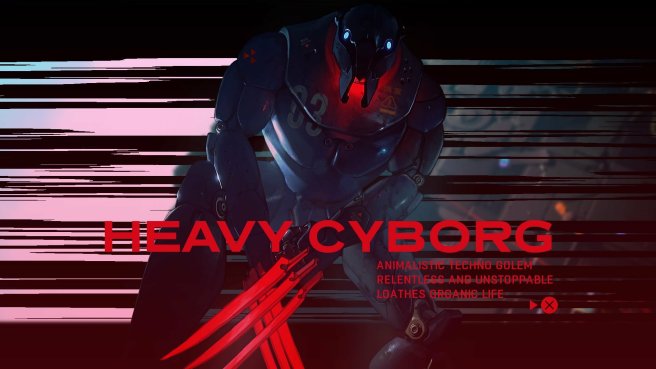 Combat in Ruiner is hectic. You can shoot and attack with melee, as can your enemies. It is neither a simple action game, nor a bullet hell shooter. You and your enemies can both dash and use shields. Often there are large mech-like enemies, basically gun placements, that need to take priority. Then there are sub-bosses and bosses. Keeping on top of everything is almost more to do with mental arithmetic than thumb gymnastics. So many enemy types and patterns meant I often felt like I was getting side swiped by a weak minion while focused on a hulking boss, which can be a frustrating way to go out. To that end, the second half of the game debuts drones that crash-land in combat arenas; they don’t attack you, but their mere existence in the level drains you of health and energy. It means death doesn’t necessarily feel like something you learn from all the time, but rather a result of being buried under a mountain of foes.

Adding to the confusion is one of Ruiner’s most intriguing gameplay mechanics; its skill tree. Moreso than any game I’ve played this year, Ruiner really means it when it says ‘play however you want.’ You have a bevy of awesome special powers at your disposal; EMP grenades, supply drops, different types of shield, special melee attacks, increased ammo capacity, mind control of enemies, bullet time and more. When you level up, you can use experience points to unlock a new ability or upgrade an existing one. At any point in the game, you can unassign those experience points and reassign them elsewhere, disabling one special ability and unlocking another. This isn’t a limited time offer, or a feature tied to rare consumable items. You can do this at any time.

This approach to leveling up enourages experimentation, which is great, but can increase your death-rate as you try and find the right mix of talents for your playstyle. Early on, I realized the personal shield wasn’t for me, although later in the story, an allied character said I should deploy it to survive a laser attack from a boss. It’s rare, but it was disappointing for such a freeform system to require you to adopt certain tact to progress.

Other than that, it’s a fun system to toy with, and it’s extemely satisfying to find the right combination of tech for you. And, really, it’s the only standout aspect of the gameplay.

Ruiner does two things; drop you in an arena to kill wave after wave of enemies, and drop you in a story HUB to soak up some ambience and collect side quests. There’s no frills here. Even those side quests are things you can do as you work through the main levels that advance the plot. The melee combat is fast and fairly satisfying, as you dodge around foes and pummel or slice them with your weapon of choice. Gunplay feels a little less precise, with enemies moving far too fast to really be worthwile unless you’re using special abilities that stun or slow them down. The game has a useless auto-targeting feature turned on by default, that I recommend turning off. The variety of guns will draw you in however, with electric shock rifles, sawblade cannons and more traditional machine guns, all of which at least look and sound devestating and feel fun to play around with. Mixing the sci-fi weaponary with the aforementioned special abilities, and a collection of bats and blades means the combat never feels dull, despite it’s simplicity. When you’re not dying on a loop, you will occassionally marvel at just how cool your character looks and feels while zipping around the map, slicing enemies in two.

The real draw of Ruiner is the world. Wearing its anime and cyber punk influences on its sleeve, Ruiner is absolutely stunning from first loading screen to closing credits. The distopian metropolis for a setting isn’t unique, but it’s gorgeously realized. The city streets are filthy, but glowing with neon signs. The industrial levels are lit with an almost overbearing amount of red light. The game’s incredibly cynical vision of the future sees husks of humans, with tubes and wires bursting from their skulls, mind’s melted by overdosing on virtual reality escapism, attacking you in the later levels. It’s all very grim and nihilstic, with dark themes, dark visuals and beautiful, brooding, understated music.

The only letdown is the story, which almost feel like it betrays the rest of the world building with how rote and predictable it is. While your protagonist at least looks as badass as his surroundings, his story will just be something for you to skip through. Furthering the disappointment is the inexplicable lack of voice acting. Not every game needs VO, but Ruiner feels straight up jarring at times, as characters deliver their nihilistic, cyber punk-y monologues, drenched in red neon, looking as cool as possible — and then their character model just gestures to suggest speech, as the subtitles appear. It’s very flat.

Overall, Ruiner is a worthwhile experience. The combat is fun if unremarkable, with tonnes of weapon variety and special abilities to tinker with. The difficulty may push some away, but I don’t doubt some will relish it. The world is remarkable, and begging for a more compelling story to take place in it, but even without that it’s worth the five or six hours you’ll spend ripping through it.