When I set this site up, I added a ‘blog’ category just in case I had any non-review, personal writings I wanted to make. Nothing really came of it because I pretty much commit every thought I have to the internet anyway, so who needs more of that but without a character limit?

Anyway, it’s year-end and I’m feeling awful reflective. I wanted to jot something down other than what my top five Call of Duty maps are this year (Nuketown remains undefeated), so here we go.

This year was bad. I’m not sure how to write this without sounding extremely dramatic, but it’s the only phrase coming to mind right now; I feel like every aspect of myself unravelled this year, and I’m not sure I’ll ever be back to the way I was before.

There was a whole mess of things before Summer rolled around that were getting me down for one reason or another, but then in May, the nearly-four-year-long relationship I was in ended. In a way I’m lucky because we’re still friends, it didn’t end in bitter betrayal and ruined social circles, but that also made it all the harder. The slow realisation that things just aren’t working is extremely painful, and you don’t have the crutch of hatred to lean on either. You can’t convince yourself that the other person is evil and it’s all their fault; because it isn’t. Instead you have to do a more traumatic and drawn out version of telling yourself “it be like that sometimes.”

From there I slid into a pretty grim place. I’ll say right now; I don’t like saying I ‘got depressed’ or I ‘have depression’ super flippantly. That’s an extremely real problem a lot of people have, and I sort of feel like an imposter saying it about myself after a few rough months. I dunno; maybe that’s ignorant in its own way. But for now I’ll just say; I was extremely fucking sad.

It was a two-pronged sadness:

I was sad in a mournful way because of the good times that were now finished; you know the type. Real shitty romance movie type of woe. Looking at photos of happier times, all that good stuff.

Then I was also sad because I came to a gradual realisation that the problems in this relationship were not entirely but fairly significantly laying at my feet. That made the aforementioned mourning even harder but also gave me something NO 27 year old should be without; an existential crisis!

I won’t get into the minutia of it all, but it made me question the kind of person I really am. Because I thought I was a good boyfriend and a by extension a good person. A nice person. But when I took a more frank look at things, I realized how pig-headed I had been for so long, how stubborn, how self-absorbed – and the irony of that last one isn’t lost on me as I type this thesis, don’t worry.

That realisation extended beyond the break up and into a lot of other facets of myself. I came to realize there was a big gap between the good person I wanted to be, and tried to be seen as, and the actual person I am.

To flick back momentarily to the other, non-relationship issues I mentioned earlier; this was another year for me in the same office job that is in no way tied to my actual passions in life. But hey, that’s true of a lot of people.

It’s not all bad. I work with a wonderful collection of people; honest-to-god great friends I’m happy to have in my life. It’s a big company but it also takes decent care of me; a thing a lot of people can’t say.

But as I mentioned; this has been a year for me to actually look at everything in my life and be a bit more honest about it with myself.

I took the job four years ago because I needed the money and the journalism/writing gigs just weren’t coming. Since I graduated from university — actually — since I started writing when I was 16, I told myself and anyone who asked that I wasn’t doing much writing because it’s super hard to actually get a chance.

It is hard but I also don’t bother. I’ve had contacts passed to me, friends send me links to internships, heard mutterings of opportunities here and there, countless times in the last ten years. The reason I don’t pick up the phone or send a quick email is because I’m scared they’ll actually reply and say “sure! Send me a sample of your work!”

MY work? Send them my work? God no. What if they, like, look at it? I hate my own stuff; I think a lot of writers do. But the idea of talking about it extensively, especially if the other person is an actual pro, makes me very anxious. So I’ve basically let that fear stop me from pursuing the career I actually want. But I act like I try and I just can’t break through. I spun this exact bullshit in a meeting just a few weeks ago; trying to articulate my frustration at my lack of career movement without admitting to anyone that it’s my own fault.

So, all this stuff adds up.

And as mentioned before; I got extremely fucking sad.

And I would just cry and cry and cry and cry. Endlessly. I really learned the meaning of the phrase ‘cry yourself to sleep’ this year. I always thought it was just crying in bed then sleeping. But no. Now I know that it’s when you literally wear yourself out from crying. I would go to bed and wouldn’t sleep for hours because my brain was just going 100 miles an hour, thinking about everything I’d done wrong, everything I did that let other people or myself down. And sleep was impossible until I started crying and then, at the very least, I’d tire myself out.

Then I’d wake up and go to work on an hour or two of sleep. And I’d have to go to the bathroom every 30 minutes either to cry or to calm myself down from the brink of crying. And that wasn’t even about anything in particular. I just didn’t want to speak to people and all it took was a look or a question and I’d have to bail. In hindsight, I probably did want to talk to them, and I work with good people who would listen to me, but in true man fashion I did not want to face it head on.

And this just built and built.

One night, I got a little too drunk (a great idea) and got some pretty bad thoughts in my head that I didn’t act on, nor even really come close to acting on, but I’d be lying if I said they weren’t there. With some coaxing from friends, I decided to try counselling.

It helped to vent and he seemed like a good guy, but I didn’t go back. Likewise, I went to my GP. He and I were both hesitant about antidepressants, so he gave me a small dose of a very mild pill. I took it for a few weeks, used it to get myself back in alignment and do some self reflection and, as of this writing, I won’t be taking any more.

At this juncture I want to say that I absolutely think antidepressants helped me, my decision to go forward without them isn’t set in stone, and I absolutely recommend speaking to your GP about what’s right for you, and in what amount, if any. What I’m doing might not be right for anyone else. This post is pretty much just a rambling recount of the year, not any kind of self-help guide to be emulated (imagine if it was!).

So where does that leave me now? Am I “better?” DID ANYTHING GOOD ACTUALLY HAPPEN THIS YEAR? So many questions. If you’ve made it this far into this mess, I’m happy to report that it is, in fact, not all bad.

First of all; I made it to December. Not to be overly simplistic but; it could be worse.

Part of what got me through the year was my friends, just in case this blog from The Man Who Realizes Maybe He Is The Problem needed another cliche. 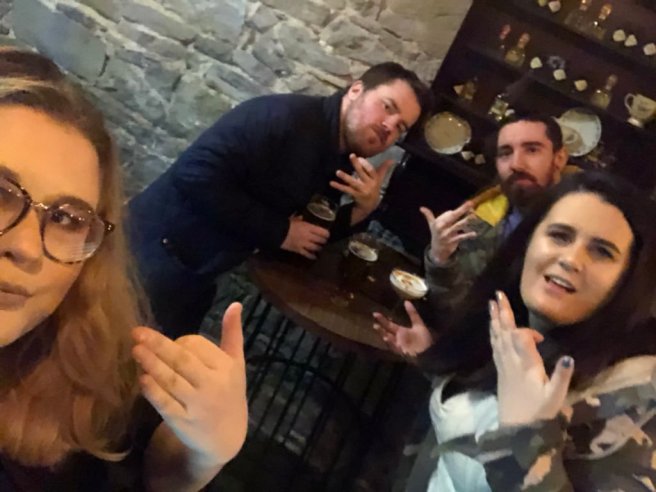 I have a lot of great people in my life; from school friends I still speak to 15 years later, to people I just met this year.

I grew closer to people I’ve known for long stretches of time, and made new friends who’ve already made huge impressions on me in less than six months. I’ve travelled up and down the country and gone abroad with friends from a few different social circles – I rarely feel like there isn’t someone there for me to talk to or to do something with. It’s not something take lightly, especially as someone who didn’t always have that many friends.

I got to lounge in the sun in Valencia and go on an exhausting wrestling festival weekend in Germany; not to mention wearing a path up and down to Dublin to spend time with great people there.

It’s obvious to me that there is some stuff I need to work out with myself in the next few months. Great friends can keep me going, but for most of my life I was also a fan of my own company – which hasn’t been the case lately. For now I’ll just keep taking everything a day at a time and trying to be better. And maybe 2019 will be a good year.

I mean, like, for me specifically. Everything else is fucked, sorry.