Having spent the majority of my life playing video games, I have skipped an untold number of time-wasting conversations. You know the drill; the text box slowly fills up with meaningless NPC waffle, warning you of impending doom or making an unfunny quip. You mash ‘A’ to make the box fill quicker, then again to skip to the next line. And repeat.

Sure, sometimes you want to hear it. But other times when a game makes no effort to grab you with its story in the early goings; the ‘skip’ button gets a workout.

Typically, brushing off what a character has to say doesn’t manifest itself on your character or in the game world (with some exceptions). You’re simply speeding the conversation up.

Katana Zero changes that. And while there’s lots of exciting things to talk about in this twitch-y, psychedelic, action-platformer; I’m mainly fascinated by this.

In the latest offering from publisher Devolver Digital, when conversing with anyone from a plot-critical character to a hotel receptionist, you have a brief window to interrupt conversation. As a character’s text bubble is filling up, you can insist ‘let me in’ or ‘give me my medicine’ before they finish their thought. The other characters react as you would expect; becoming insulted or impatient with you. At first glance it’s just a nice creative flourish to make the world feel as though it’s responding to the player’s impatience. But it can actually manifest in some changes to how you interact with the game’s cast. 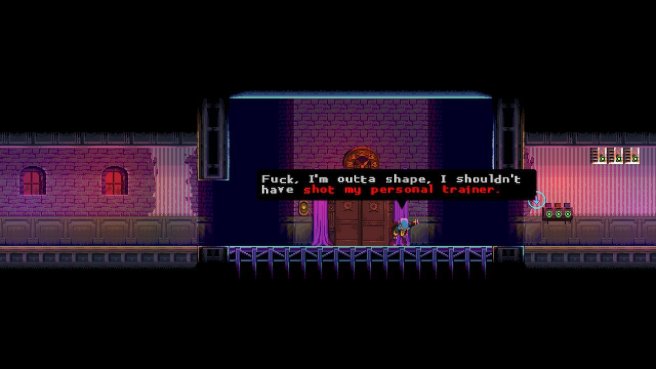 The aforementioned hotel receptionist is initially suspicious of our hero’s outfit; being a samurai assassin, he doesn’t exactly blend into a crowd. If you don’t want to engage with the game’s mildly amusing dialog choices, you can interrupt her and just brute force your way to the next level of blood-soaked, side-scrolling action. When you’re making your escape later on, she’ll happily watch you tangle with the SWAT team member waiting in the foyer. Conversely, if you humour her initially, you can unlock a dialogue choice that convinces her you’re cosplaying as an anime character, much to her amusement. Now when you encounter the machine-gun toting cop upon your escape, she’ll advise him you’re harmless and you can walk out without incident. It’s a small detail, and battling one additional enemy isn’t going to stress you too much, but this mechanic is a delightful way to reward patience in the player, and it goes beyond trivial exchanges with background characters too.

The core of the gameplay is side-scrolling action, with one hit resulting in death for the player. You have a jump, a sword strike, a ‘throw’ for one-use melee items found in the world, a dodge-roll, and a handy slow-motion power that allows you to knock bullets back at enemies. It’s a basic skill set that’s easy to get to grips with, and the difficulty progresses steadily so you never truly feel overwhelmed. Thrown items add in some new mechanics later on (such as smokescreens) but things never get too complicated from the core formula. Death results in a super-speedy restart, which is always a plus, and successful completion of a level lets you rewatch your handiwork, with your slow motion actions sped up, so you look like a supreme badass. It almost feels as though that mechanic exists to encourage super ‘clean’ speed-runs where you fully embody the ninja persona. When you die, the level immediately rewinds and the caption ‘no that wont work’ appears, with the idea that the protagonist has supernatural powers of precognition, and the player’s movements are him playing out scenarios in his head; when you finish a level and rewatch your run, that’s the events actually happening. Again, like the dialogue skipping, it’s a clever way of re-contextualizing what we just accept as ‘video game things.’

All these little touches elevate what might appear to just be another violent, twitch-y, pixel-art action game in the vein of Hotline Miami, or more accurately; the criminally overlooked Not A Hero. The story is a little nebulous and hard to decipher but nonetheless intriguing. I’m tempted to jump back in for a second playthrough, as at various points I let my frustrations with some characters result in conversation-skipping, which angered them and seemingly hindered my attempts to unravel the main character’s origin story. In a way it ties in to the game’s theme’s of precognition and learning from mistakes – I could jump back in from the beginning and avoid making those same mistakes. It’s a much more interesting hook for replays than achievement hunting or more conventional ‘alternate endings,’ which this does also have.

At just 15 Euro or 15 USD for a few hours of stylish action, and some of the more ambitious ideas in an indie title so far this year, Katana Zero is an easy recommendation for Switch owners.