One of my favourite things in games is a perfectly balanced instance of ‘The Loop.’

Titles that focus on a ‘loop’ are gaming at its purest.

While it wouldn’t be fair to say Animal Crossing is entirely a game of numbers, the spirit of The Loop lives on in my adorable little island with my cuddly animal pals.

I’ve never played one of these games before, but a combination of the inescapable hype for ‘New Horizons‘ and a fairly light release schedule for 2020 made me take the plunge.

Straight away, the juxtaposition of serenity and challenge were there. The very premise is chilled out. Your little avatar approximation of yourself is moving to a beautiful tropical island, to spend the rest of their days in a permanent state of vacation. On this island (that you can name for some reason – mine is Barryland, because it is both a pun on my username for most websites, and extremely lazy) you have a handful of relaxing activities at first; crafting items, catching bugs, fishing, and socializing with your peppy, feel-good animal islandmates.

But wait a minute; can you really spend the rest of your days fishing with the “Flimsy Fishing Rod” the game starts you off with? Sure, this is paradise – but what are you, some kind of loser? Maybe if you pull a few weeds around the island in exchange for cash, you can buy a crafting recipe for a sturdier fishing rod. That’ll really impress Fuschia, the charming pink pony who lives next door to you (EDITOR NOTE: I have strictly platonic admiration for Fuschia, there is no deeper meaning here).

While I was going about these seemingly mundane activities in the early stages of the game, New Horizons was quickly introducing more and more systems and currencies to me — the lifeblood of The Loop. Better fishing rods and nets enable more thorough critter-gathering. Gather enough of those critters and you can open a museum. Sell enough weeds or miscellaneous knick-knacks and you can pay off your ‘moving fees’ which will let you upgrade your dwellings from a tent to a house. Ticking enough early-game boxes scores you a ‘vaulting pole’ which lets you cross bodies of water and reach new parts of the island — where The Loop starts anew since that part of the territory was previously untouched.

And tying it all together is ‘Nook Miles’ – a ticker that increases when you, well, do anything. Buy from the shop, sell to the shop. Plant flowers, uproot flowers. Take a picture. Talk to your neighbours. Everything. Nook Miles ensure that you are basically being rewarded for any and all aspects of playing the game – giving you a special type of currency that can be used to unlock rarer items in the game. If you’re like me and you’re a sucker for bells and whistles telling you you’ve done a good job; this game is for you.

As I said; this is more than a cold, harsh series of numbers and meters going up. Animal Crossing: New Horizons is unreservedly childlike in its ideal worldview (in a literal sense the game can and is enjoyed by babies — hey I’m just being real) but right now that doesn’t feel like a knock.

Your human character is almost Lego-like in proportions and design, whereas the likable animal chums you’ll be sharing your paradise with are almost akin to Sylvanian Families. The world is similarly toy-like in design, broadly seeming a bit simple and clean but with just enough real world touches to be really striking. The very soft movement of the leaves in time with the wind, the soothing movement of the waves on the beach (this clever camper put his house on the beach — I know how to virtually live, people), the gorgeous colour palette of the sky as it reflects the real world time of day — it’s all very well realized.

The activities are similarly low intensity. Fishing and bug catching don’t involve any kind of combative action, serving more as a collect-a-thon than a fighting mechanic. You catch animals so they can be displayed in a museum (alive, and displayed humanely of course) that is run by a nervous but insightful owl. He hoots excitedly every time you bring him a fossil to identify, and bawks loudly when you bring him a creepy crawly. It’s all very quaint and lovely. Games as meditation has never really been my thing, but my now routine two hours of island life are a critical part of my daily relaxation. It’s been quite some time since I ‘stopped to smell the flowers’ in a game, but that is almost the point of Animal Crossing; and illustrates how it evolves beyond The Loop and the idea of winning or advancing a goal. 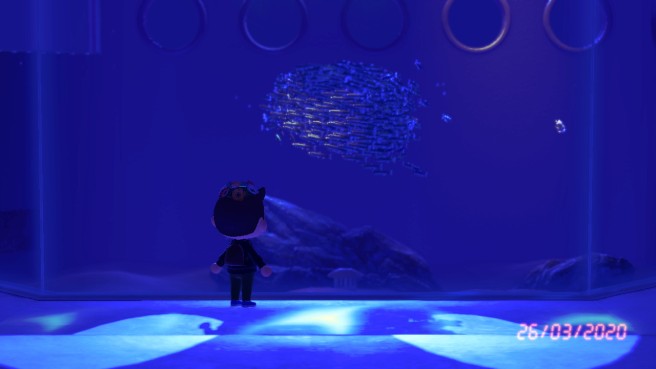 Sometimes I don’t have an immediate goal in mind, so I’ll just take a quick tour of the island and water my plants, stopping along the way to get the latest chirpy dialog from the neighbours. While there’s no real endgame to it other than creating an aesthetic I like, sometimes I’ll shuffle the furniture in my house around to give it a new look. I have spent a surprising amount of time in the aforementioned museum. While all the creatures you catch are listed in an index on your in-game phone; the actual museum is so wonderfully realized, with serene music playing throughout – that I have spent a few minutes of every day since it opened just wandering around.

God knows we don’t need another person writing about the current situation in the world; but I can’t go without acknowledging how well timed this release was. You can’t really get a mental break anywhere else; your phone, the TV, going outside (obviously). But with Animal Crossing you can simultaneously get some escapism and some normality all rolled into one. You can get an almost excessively pristine insight into the routine of every day life at a time when you don’t really have that. You can even interact with your real life friends online, in a more jovial manner than is otherwise available to you currently.

It has only been a week, but so far life on Barryland is good. Come visit some time; just don’t still my iron nuggets or speak to Fuschia behind my back.